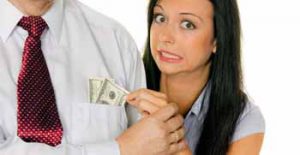 Okay – so maybe this is stating the obvious, but it is a fact that if all else is equal – most women will pursue the man who has more money. All of us love money – I love money, and I’ll be the first to admit it.  But most women in today’s society want to get ahead in terms of lifestyle, and so they either implicitly or explicitly know or will tell you that a man with money is what they ultimately seek.  I’m not really knocking this symptom of society – and I don’t think that you should either. I mean – what if the situation was reversed, and you had the opportunity to date two different beautiful women … one rich, the other not rich.  Which would you choose?  Oh – let me guess … the rich one?  Of course, you’d choose the rich one.  Welcome to America!

If chasing the wealthier man or woman is systemic to society, then why do I list it here as a “crazy woman example”?  Because as a midlife bachelor, you have to recognize when this is happening, and cope with it – especially if you are not rich!  [If you are rich, then be sure to make your wealth at least somewhat visible so that you can enjoy this advantage you have over the rest of us.]  The vast majority of us midlife bachelors are not wealthy – and as average guys, we need to know that a woman we are pursuing can easily be swept away by someone with a lot of money. My good friend, Brian, for example, owns his own business and makes a huge amount of money – at least $1M a year or so (I’m guessing).  Brian is a very funny-looking guy – not at all good-looking.  Plus he is pompous, arrogant, and loud. Most of the people I know have difficulty being around him for more than an hour or two because he is so obnoxious. I personally enjoy the guy because I’ve known him since we were kids, and I understand him better than most … I think he is funny as hell!  Anyway, since Brian started getting really wealthy, he has always landed these extremely gorgeous women.  Some he met online, some he met elsewhere – but all of these women really were captivated by Brian’s flash … by his expensive home, his expensive cars, the vacations he would take with them, etc.  Women go for the money, plain and simple.

Several years ago, one of my Latina friends introduced me to one of the most smoking hot Latinas I’ve ever seen – her name was Lena.  Lena was so hot that when she walked into a room, the whole place would stop and stare for a moment.  When I met her, I remember saying to myself, “daaaaamn – this is one hot taco”.  Anyway, I had been told that Lena was divorced, and had been dating this really good-looking yet average guy for several years … and that although he loved her, she didn’t see much of a future with him.  Now I didn’t think too much about this, or about Lena because she was way out of my league.  But a few months later, I went to a graduation party for the daughter of my Latina friend – and I saw a limo role up, and out pops Lena with some well-dressed guy.  Later during the party, I cornered Lena – and asked her about the limo and the guy, and she told me that she had recently met him in a restaurant and that he was a local real estate developer who had made it big with the Southern California housing boom.  I found out later from my other Latina friend that Lena dumped the good-looking average guy to take a chance on this new super-wealthy guy.   Imagine that?  Lena wound up marrying the wealthy guy – so things worked out well for her.

Unfortunately I do not have a good story about me losing a girlfriend or potential girlfriend to some guy with a lot of money.  This might be because I’m not poor – and have never really been poor.  What I can tell you is that some people who do have a modest amount of money can be very CHEAP.  And no matter what your income bracket, if you are CHEAP – then women are more likely to desert you.  My buddy, Mike, for example, is universally known for being CHEAP, CHEAP, CHEAP.  [He is so cheap, he can make a penny scream.]  On many an occasion when a group of us are out for happy hour, Mike will complain about how expensive the beer is.  “Dude – why are we paying $4.50 each for Corona’s when we could be drinking a twelve-pack on my couch for $11.00?”  The answer to Mike’s question is that we want to be out and about, and socializing with each other and new people – and we can all afford the price of beer.  I’m not sure if Mike says something similar on the relatively few dates that he has been on in the last several years, but if he does then that would explain why he never has a girlfriend … as women do not appreciate someone who is cheap!