Note the brand-new COMMENT section at the end of this article (here) – where you can add your own comments about this article. You can also always opt to discuss this in the Midlife Forum 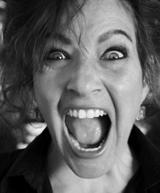 I have had a fair amount of comments and questions on the “psycho” type of woman (from the 14 Types of Women under Fundamental Truths about Women and Midlife Dating Today … the section entitled, Types of Women – Psycho).   Recently, a very intelligent and good-looking woman with a PhD wrote in – and explained that it is men’s behavior that often make women become psycho … and she asserted that it is unfair for me to unilaterally label certain women as being psycho without knowing the circumstances, or possibly looking inward (at the man) for the root cause of the woman’s psychotic behavior.   She makes a good point – and so this short article elaborates a bit on the topic of PSYCHO WOMEN.

I believe that there are two types of PSYCHO WOMEN:

Psycho Women who are “Psycho by Default”
The Psycho Women I wrote about under Types of Women – Psycho are really the ones that belong under category 1) above … which means they are psycho all on their own … without anyone’s influence or intervention.   Let’s review some quick examples from the Types of Women – Psycho section.   First of all – there was Mia … the hot car dealership customer service girl.  On my very first date with her, she sent her food back several times and made a big stink about how her meat was cooked … for no good reason … while my food got cold … and at a fairly cheap restaurant.   That was psycho in my mind – and she confirmed this psycho attribute a few dates later when she went off on me for bringing her ground sirloin, and then yelling at me when I tried to kiss her goodnight!   Trust me – there was nothing that I did in any of these instances that caused this woman to turn psycho … she was that way on her own … which is exactly why I wrote her off after that second psychotic episode.

Another good example is the wife of my buddy, Greg – her name is Tiffany.  Whenever she shops, if anyone working in the store does not treat her with the utmost respect and graciousness, then she will pitch a fit and make a big scene … as though the world owes her some kind of royal treatment.  My buddy, Greg, won’t even go shopping with her – because he says she is so volatile that he never knows when she is going to blow a gasket over the tiniest thing.  I’ve seen this woman in action myself, and she needs no one’s help in order to deliver a 100% psychotic episode!

Now there certainly are varying degrees of psychotic behavior – and really when I refer to “psycho women”, I am referring to those who display the extremes … women who suddenly go off on you for no reason, or with little warning or provocation.  These psycho women are usually fairly easy to spot … although sometimes they know they are psycho, and are able to mask or withhold their psychotic behavior for some period of time during the initial phases of a relationship.   The best thing you can do is to watch for bizarre behavior, and make the appropriate mental notes … because you may have to dismiss her if these episodes become anything more than infrequent.