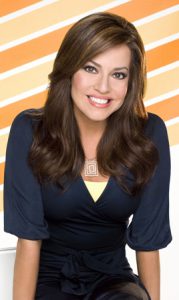 Robin Meade, of HLN (formerly CNN Headline News), has been selected as the midlifebachelor.com Woman of the Month for February 2009!

If you have not seen this very hot news anchorwoman, be sure to check her out – she is the anchor of HLN’s morning show, “Morning Express with Robin Meade”.  She displays an excellent mix of intellect with hotness … which means we can listen to bad news all day long if she is reporting it.  ha ha

Here is what we know about Robin Meade.  As I mentioned, she is the anchor of HLN’s morning show plus she co-hosts Turner Private Network’s AccentHealth which is played in physician waiting rooms all over the US.  One of Robin’s most famous recent stories was the exclusive first interview she landed with the American hostages who escaped from Brazil’s FARC revolutionaries.

Robin Meade was born in April 1969, so she is currently 39 years old – and looks great.  She grew up in New London, Ohio, and attended Malone College and Ashland University.  In 1992, she was Miss Ohio – and was in the top ten finalists for the Miss America pageant.  She has been married to Tim Yeager since 1993.  She has an autobiography due out in 2009 which she refers to as a “non-fiction / motivational / inspirational / how-to / autobiographical book” … so be sure to watch for it this year.

Typically at this point, we attempt to analyze our Woman of the Month pick in terms of the Midlifebachelor.com 14 Types of Women.  Which type or types do you suppose Robin Meade might be?  Well, she is certainly a Jackpot (see Types of Women – Jackpot) since she is a high income earner.  If you know Robin Meade personally and/or would to share something about her – please add a COMMENT to the comment section at the bottom of this page!