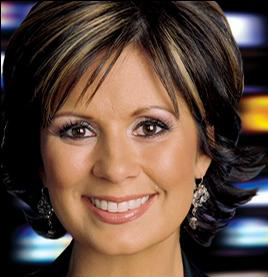 Maggie Rodriguez, anchor of the CBS News Early Show, has been selected as the midlifebachelor.com Woman of the Month for May 2009!

Now honestly, I do not watch the Early Show at all – but instead I became aware of Maggie Rodriguez because she sometimes substitutes for Katie Couric on the CBS Evening News which I often watch after I return from the gym on weekday evenings.  I’ve never really been a huge fan of Katie Couric as a news anchor – and I’m even less so now since Katie got that terrible boy haircut.  Anyway, when Maggie Rodriguez appeared in place of Katie, I was thinking to myself, “YES – CBS finally figured out that I want to see a hot, well-dressed age 40-ish woman report the news in a more matter-of-fact way!”  Of course, I was disappointed to learn that Maggie Rodriguez was only a substitute anchor – but hey, Les Moonves has his thinking cap on at least part time.  Anyway – Maggie Rodiguez is absolutely stunning, and she reports with grace and character – all the things that Katie Couric is not and has not.

Here is what we know about Maggie Rodriguez.  She was born in Miami to Cuban-born parents.  She graduated from the University of Miami in 1991 with a degree in Broadcast Journalism and Spanish.  She is multilingual … she speaks English, Spanish, and Italian.  She is married (rats!), and lives in New York with her husband, Michael, and her daughter, Daniela.  We guess her to be roughly 39 years old – since she graduated in 1991, and assuming she graduated at age 21 … that should make her age 39 or maybe 40.  Before joining CBS in January 2008, she was a news anchor for KFOR in Miami.

Here are a couple of videos of Maggie Rodriguez in action.  My favorite is actually the second of the two – which shows Maggie on a women’s bootcamp-style vacation in Tulum, Mexico … where you can see what she looks like without makeup.  I have to say that I like the au naturel Maggie Rodriguez – hot hot hot!!!  How many news anchors could get away with having themselves filmed under such circumstances?  None – except those with superb natural beauty.   Go Maggie – we love you!!!  Concerning the first video, I could not find any videos that featured mainly Maggie – and so I chose this particular one where she interviews Mitt Romney about the auto industry mostly because I like the way she is dressed – fairly formally … plus I think this video well embodies the overall style that Maggie Rodriguez exudes which I really, really enjoy.  Maggie Rodriguez is absolutely everything that Katie Couric is not!

Typically at this point, we attempt to analyze our Woman of the Month pick in terms of the Midlifebachelor.com 14 Types of Women.  Which type or types do you suppose Maggie Rodriguez might be?  Well, she is certainly a Jackpot (see Types of Women – Jackpot) since she is a high income earner.  If you know Maggie Rodriguez personally and/or would to share something about her – please add a COMMENT to the comment section at the bottom of this page!